It’s no secret that the EDGE District is the premier spot for food, music and brews in the Burg. In the fall, the district received the designation as a wet zone — allowing the area to host up to 9 sip and stroll events per year with city approval. The coffee shop Intermezzo further infuses the EDGE with artisanal roast while Kings Street Food continues to deliver unique foodie delights to visitors.

The return of the Independent Bar caused substantial buzz for those nostalgic for its time in the core downtown area of the Burg years ago. Grassroots Kava Teahouse just opened its doors following the official openings of the urban gardening shop Urban Roots and the home decor haven Texture. Let us not forget the imminent arrival of Dr. BBQ’s (1101 1st Avenue South).

What does the future *potentially* hold for the EDGE? 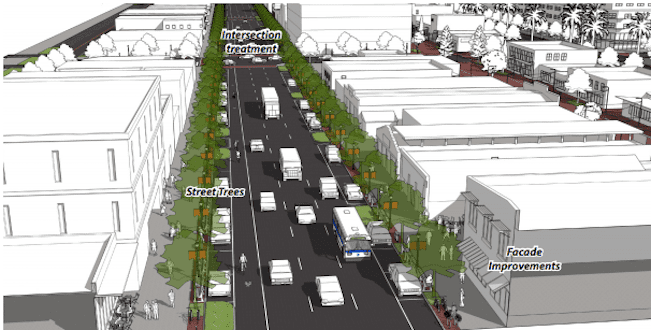 In order to make the area more accessible the association asks the city to consider updating existing bus stops within the district. Updates would include installing benches at all stops, as well as pedestrian scale lighting and shelters. Plans also call for the installation of more bike racks/bike share hubs in the area — one of which could be located at Central Avenue and 13th Street in a new public plaza.

In order to make cyclist and pedestrian travel easier, the EDGE District Association has called for the future development of the Booker Creek Trail to be well-integrated into the district, with connections to existing bike facilities.

To assist with the growing crowds in the EDGE, association members hope to work with the city to add a new parking structure/garage along 1st Avenue North. The structure would complement the major redevelopment of Baum Avenue North, which could become a pedestrian-oriented road in the coming year.

The new Baum Avenue would include specialty lighting and paving, stormwater planters and outdoor dining. The pedestrian arcade would open the area up to more retail concepts and allow for more seating at the popular restaurants in the district. Proposed plans also reveal curbless streets. Their removal would help maximize the space for large-scale events. Renderings also reveal a potential overhead art installation along Baum Avenue.

Improved green space throughout the district

Additional updates include a promenade and widened sidewalks on Central Avenue, a renewed focus on green space and to clean, restore and stabilize creek banks.

Nothing is set in stone just yet; however, the proposed improvements have us beyond excited about the potential future of the EDGE District. You can view the entire Master Plan here.

*Article by Andrew Harlan, writer/editor of I Love The Burg