Sunday at thestudio: ‘Shakespeare in a Day,’ Literally - I Love the Burg

With all its magic, majesty and mellifluousness, Veronica Leone Matthews believes, a Shakespeare play is a dish best served outdoors.

“For me,” says the founder of the St. Petersburg Shakespeare Festival, “the reason is really personal, and maybe a little selfish.” To wit: In the early ‘00s, Matthews had performed in American Stage’s Shakespeare in the Park series at Demens Landing. She never forgot the experience.

“And then when I saw it later in other places, there was something so special – hearing the language in the air, and being able to look away from the stage and see stars, or the moon. I know it sounds kind of cheesy, but that’s really why I do this. That’s the crux of it.”

American Stage discontinued the Bard series in 2006. Eight years later Matthews, with a freshly-minted MLA in English from the University of South Florida (a degree earned with a heavy emphasis on Shakespeare), re-connected with many of her former castmates. She created the St. Petersburg Shakespeare Festival as a 501(c)3 nonprofit, and went to work on bringing the fruits of her mad, mad love back to St. Pete.

This October, the second of the festival’s two 2018 productions, A Midsummer Night’s Dream, will be staged in Williams Park. Bob Devin Jones will direct.

As a run-up, Matthews and just about all of her company will be at thestudio@620 this Sunday (Aug. 26) with Shakespeare in a Day: Midsummer Scenes.

The In a Day series started when both of the group’s annual outdoor productions (then at USFSP) took place at the same time of year; the company members found themselves sitting on their hands for the remainder of the year.

“Our actors, I am so excited to say, really love working with us,” Matthews says. “We always have a blast.”

She wanted not only to keep the name out there, but to give the actors something enjoyable to do in the off-season that wasn’t as time-intensive as a full production.

Sunday’s event will blend specific Midsummer scenes with musical interludes. “The cool thing,” says Matthews, “is that the actors get the script at 10 a.m. They don’t get it beforehand; we literally do it in a day.”

The reading – there’ll be scripts in hand – is part of a three-event collaboration with thestudio@620. In July, Matthews’ group staged I Am Juliet, an adaptation of Romeo and Juliet, Hamlet and A Midsummer Night’s Dream that she began writing for her graduate thesis. 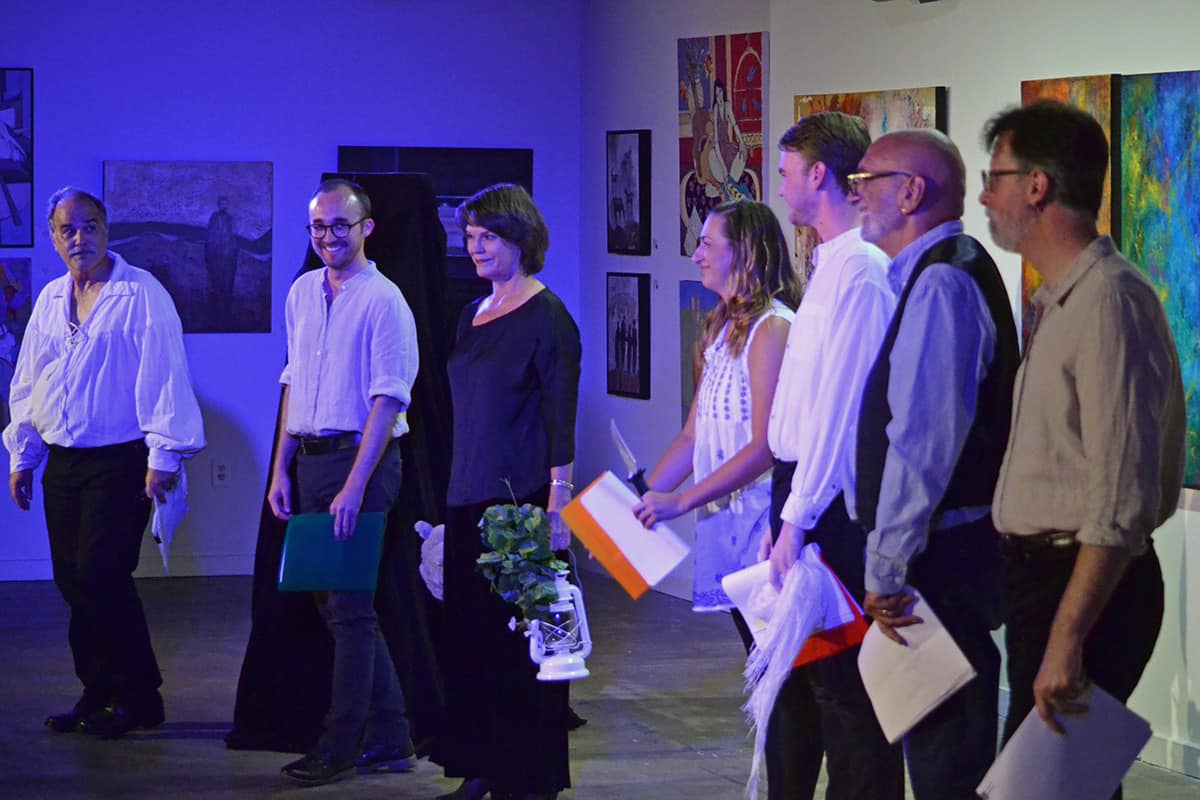 The events are also tied to the Individual Artist Grant she was awarded in the spring through the St. Petersburg Arts Alliance.

Matthews, the Office Manager in Online Learning and Instructional Technology Services (OLITS) at USFSP, is also a doctoral student in the Program Development, Educational Innovation program at USF Tampa.

For her, it all started with the seed planted by American Stage in the park. “I grew up viewing those,” she explains, “and so it really had a lot of impact on my formative years as an actress. And I just absolutely fell in love with Shakespeare.”

Sunday’s event starts at 7 p.m. Admission is free (but donations, of course, are welcome). Details here.

Read more about the Arts by Bill DeYoung here.

Bill DeYoung is the Florida-based author of Skyway: The True Story of Tampa Bay’s Signature Bridge and the Man Who Brought it Down and Phil Gernhard, Record Man. A veteran newspaper reporter and editor whose music journalism has appeared in numerous national and international publications, he is also featured as an essayist in the liner notes of more than 100 albums, by artists ranging from Cat Stevens (the four-disc “Cat Stevens Box Set”) to Stephen Stills, B.B. King, Black Oak Arkansas and Steve Winwood.