Movies in the Park is a St. Petersburg tradition. Every fall and late spring Preserve the Burg screens classic family-friendly films in North Straub Park on select Thursday evenings. Their October 2019 lineup features a few crowd pleasing favorites sure to get you in the mood for the spooky season.

Each night there will be a live music performance before the film begins. This event is free and open to the public. Music starts at 6pm, and the film screening begins at dusk. If you’re biking, there’s a bike valet on site that can help you park it during the event. Food and drink is available purchase at the event, but you can also just bring your own picnic basket. Don’t forget a blanket and/or low chairs.

OK, now then, here’s the full music and film lineup.

Jack Lemmon and Walter Matthau star in this comedy classic about two friends (and total opposites) trying to share an apartment together.

Botomatics will perform live before the film.

George Lopez and Jaime Lee Curtis star in this film about four Hispanic high school students who form a robotics club. With no experience, almost no money, and some used car parts, the group find themselves going up against reigning robotics champion, MIT.

George Pennington will perform live before the film.

Bill Murray and Andie MacDowell excel in this wild Harold Ramis comedy.In a nutshell, this movie is about a weatherman who finds himself inexplicably living the same day over and over again. It’s basically an excuse for Murray to stretch and show off all of his comedy muscles.

Funky D’s Deja Voodoo will perform live before the movie.

Raiders of the Lost Ark

We know, you’re probably hearing the Indiana Jones theme right now. This face melting blockbuster film continues to enchant and entertain audiences of all ages. A rugged Harrison Ford says as Dr. Jones who is hired by the U.S. government to find the Ark of the Covenant before Adolf Hitler’s Nazis can obtain its awesome powers.

Gloria West & The Gents will perform live before the movie.

Scooby Doo & The Spooky Scarecrow & The Phantom of the Opera

It’s a Halloween double feature! Scooby Doo and the gang will solve another mystery before the classic Phantom of the Opera takes the screen.

Vince Di Mura will perform live before the film.

Check out the event’s new poster, crafted by the one and only Carrie Jadus. 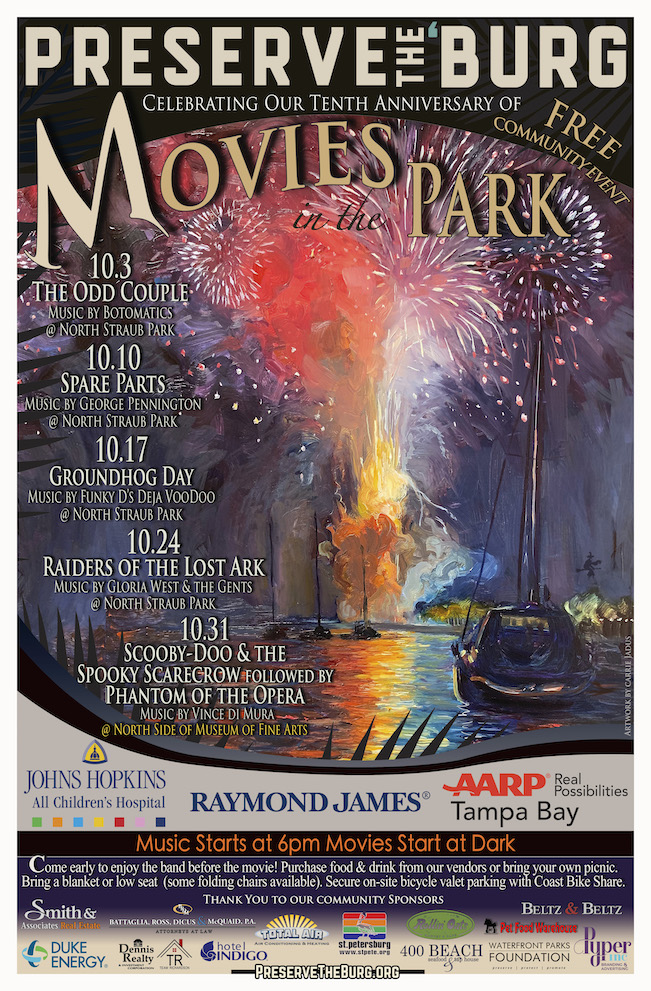 What movie are you most excited to see? Let us know in the comments.

More From: Do It