New Mural on 4th Street is a love letter to St. Pete - I Love the Burg

Mural mania will never end in the Sunshine City — and we wouldn’t have it any other way. The latest addition to the Burg’s public art scene is a love letter to the history of the city and was cocreated by two of the most prolific muralists in the game, Derek Donnelly and John Gascot.

Mural ties in with St. Pete and Pilot Bank history

The mural is located on the curved wall of Pilot Bank (2180 4th Street North) which will be the bank’s first St. Pete location.

The aviation theme obviously fits in with the history of St. Pete. The first commercial flight departed from the Burg in 1914. One of the founding chairs of the bank was a pilot, too, which only adds to works relevance. 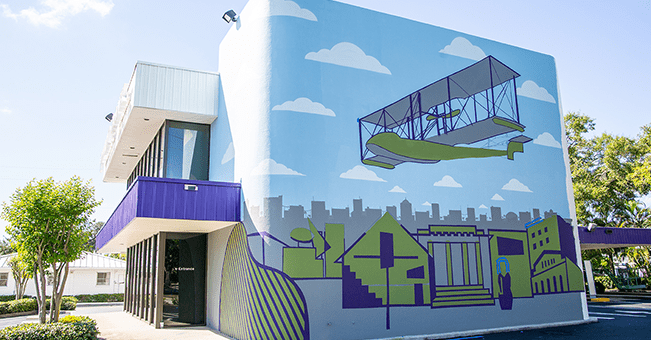 Artist John Gascot grew up in Puerto Rico, which has greatly influenced his Latin Pop style. Gascot is a renowned curator of art in the St. Pete area and strives to create opportunities for aspiring artists.

John is the creator and founder of Diversity Arts, Inc. The nonprofit serves disenfranchised youth and groups by providing safe environments, guidance and materials for creative self-discovery, expression and sociocultural interaction.

Donnelly is the godfather of St. Pete’s mural scene

Derek Donnelly is a St. Pete native who has tattooed the Burg over and over again throughout the years.

He graduated from the Pinellas County Center for the Arts at Gibbs High School in 2001. Donnelly then attended IADT in Tampa for graphic design, specializing in digital illustration and brand development.

Donnelly’s “Woomorial” tribute mural to the late Bill “Woo” Corriea has become somewhat of a landmark for the 600 block. He currently runs COVE in Pinellas Park, which helps spotlight some of the best local artists in the area.