Seeing photos of deserts, camels and sand dunes of Morocco have always been fascinating to me especially if you’ve seen films like Lawrence of Arabia or Sex and the City 2. It all just seems so exotic.

But Morocco is definitely so much more than that. Although I would say that riding camels through the vast Sahara desert and sleeping under a blanket of clear night sky and all the stars you can imagine is probably one of the major highlights.

With only over a week to spare and wanting to cover as much as there is to see from Casablanca to Marrakech, the best option was to take a guided tour of the country. Pro-tip: take a guided tour with a professional and reliable company that will take care of accommodations, transfers and take you to the places you want to see and those you probably don’t even know about.

GAdventures was optimal choice for price point and previous experience touring other countries where finding the best areas to stay in and figuring out how to get there may be best left to the pros. One of the great things about the trip is having a personable local guide making sure you get to experience the sights, the people, the food and the culture in the best way possible which also means skipping tourist traps and avoiding the waste of time.

However if you decide on planning the trip on your own, here are a few of my trip’s highlights that you shouldn’t miss. 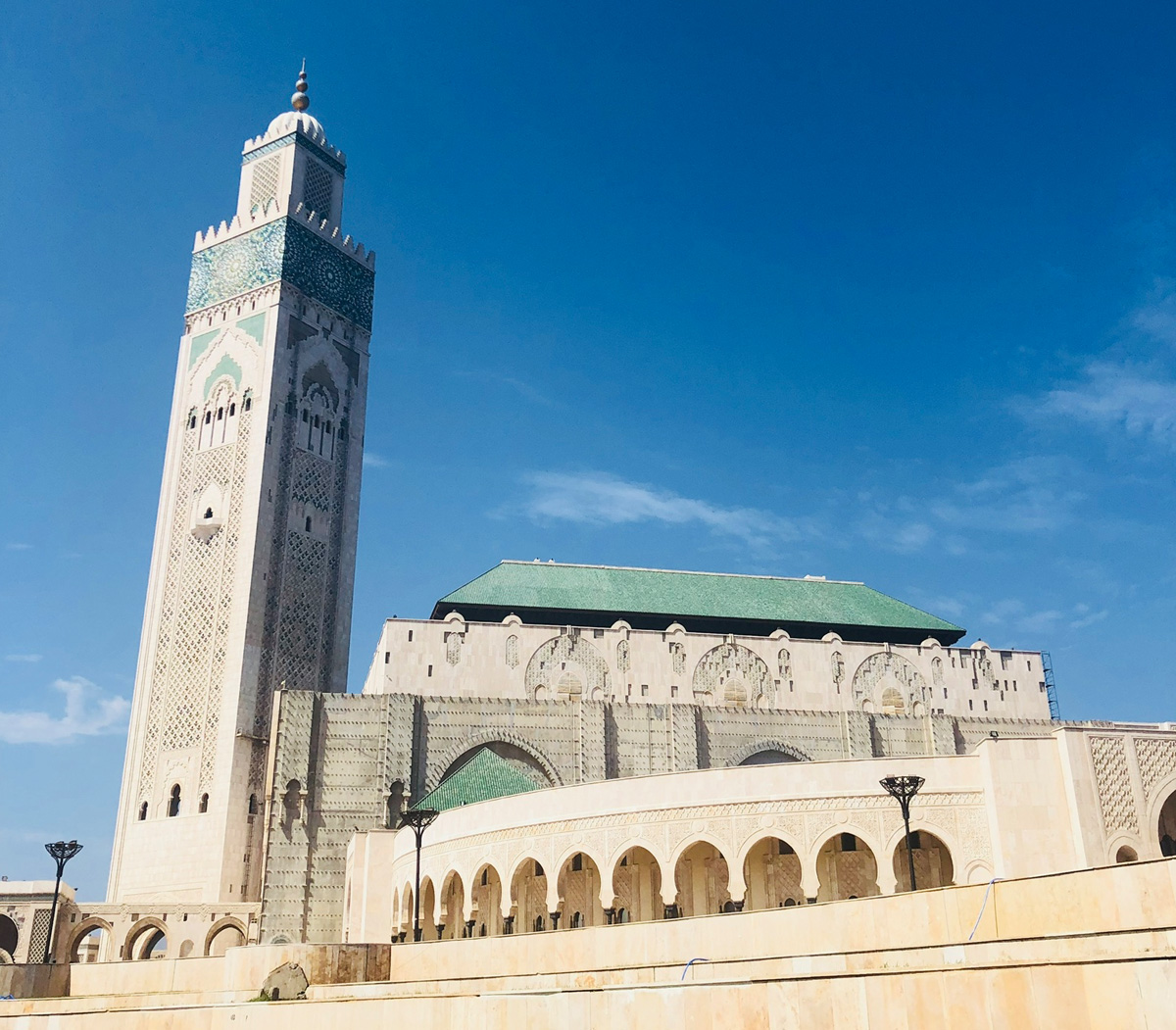 It is a towering piece of architecture made mostly of marble with a minaret that is considered the tallest in the world. It is also the largest mosque in the continent of Africa. 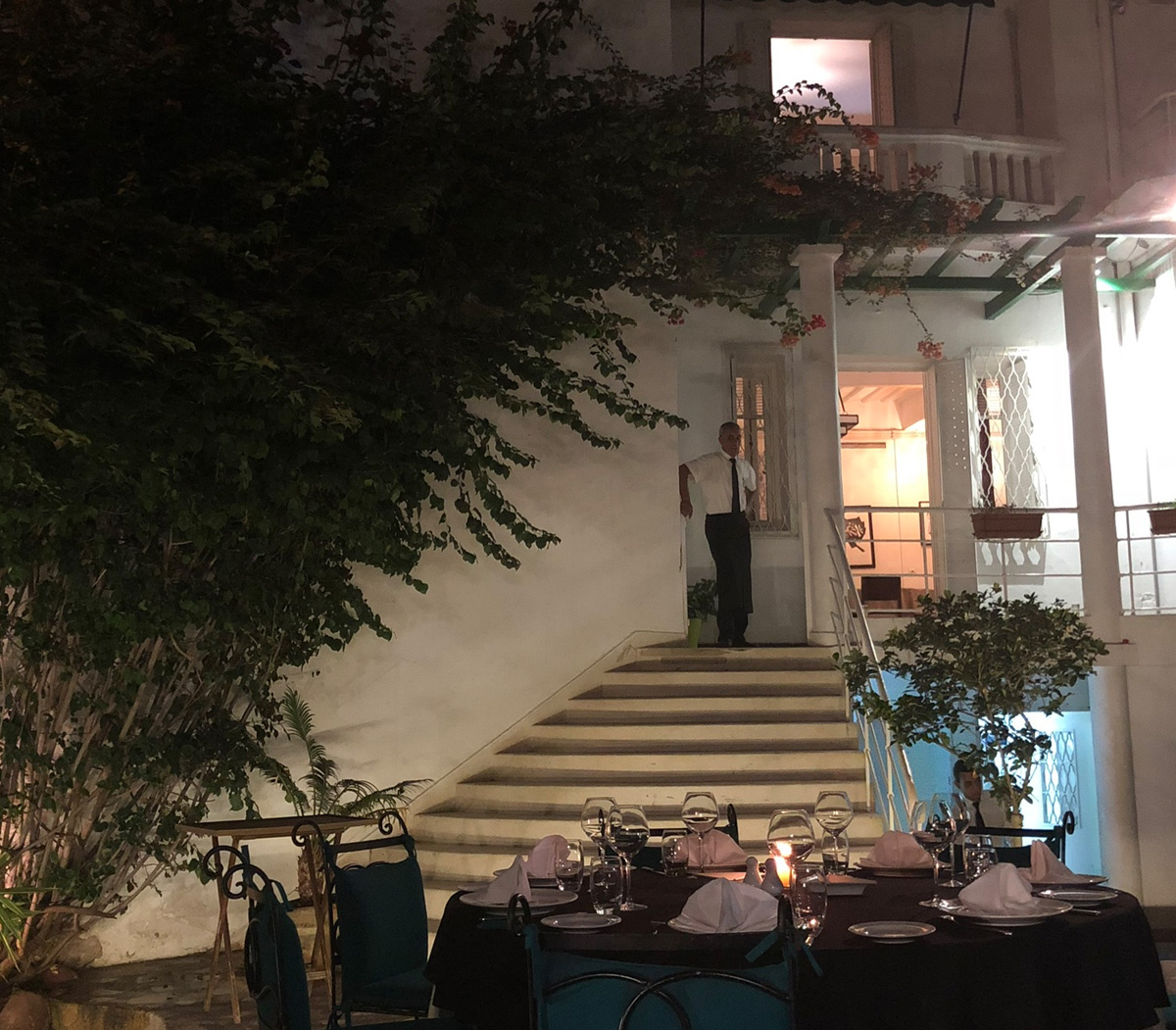 This was one hidden gem of a restaurant we almost missed as it is tucked discreetly in a romantic 1930s villa in the city center. The modern French cuisine is impeccable as is the garden table setting especially on those warm evenings.

This restaurant and bar was made famous by Humphrey Bogart and Ingrid Bergman in the classic film Casablanca. However, most people don’t know that the movie was not even shot anywhere in Morocco but in a Hollywood studio. Despite that, Rick’s Cafe’s authentic replication of the bar right in the heart of Casablanca is worth the visit, even just for a good cocktail at the bar and admiring the interior design and architecture. 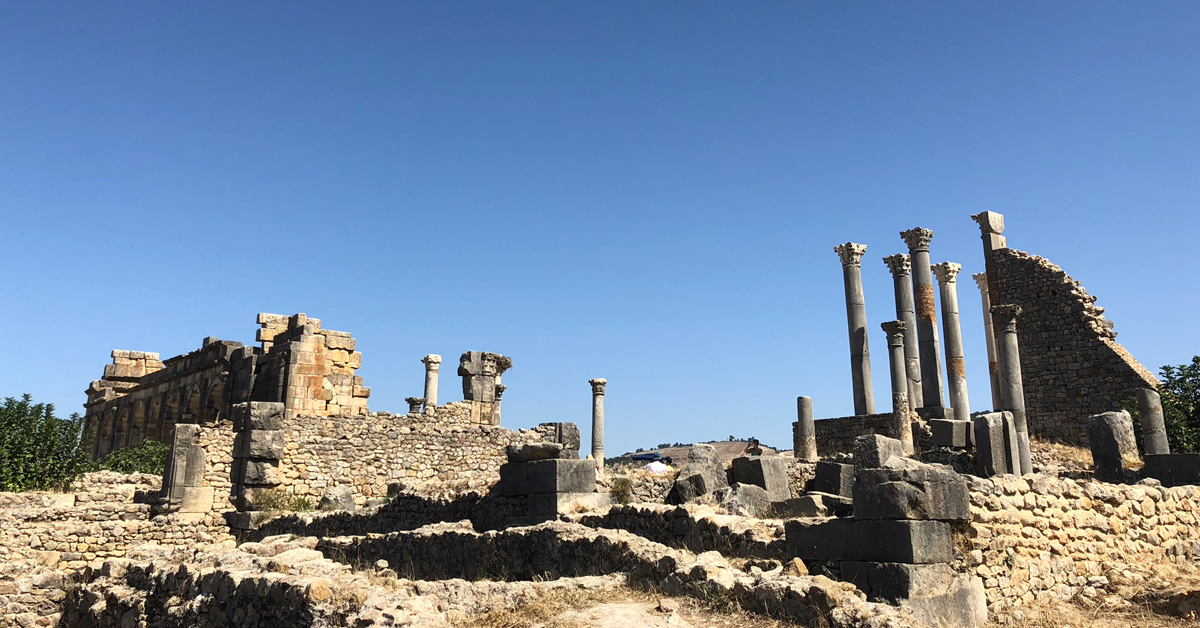 The ancient Roman city is filled with history as it is considered the capital of the ancient kingdom of Mauretania. It is also a UNESCO world heritage site. See how the famous pottery and tiles are made as you get a step by step tour and shop anything from coffee cups and plates to garden fountains and dining tables without having to haggle as they are priced considerably cheap. You can even get them shipped home if you don’t want to lug them around the rest of your trip. 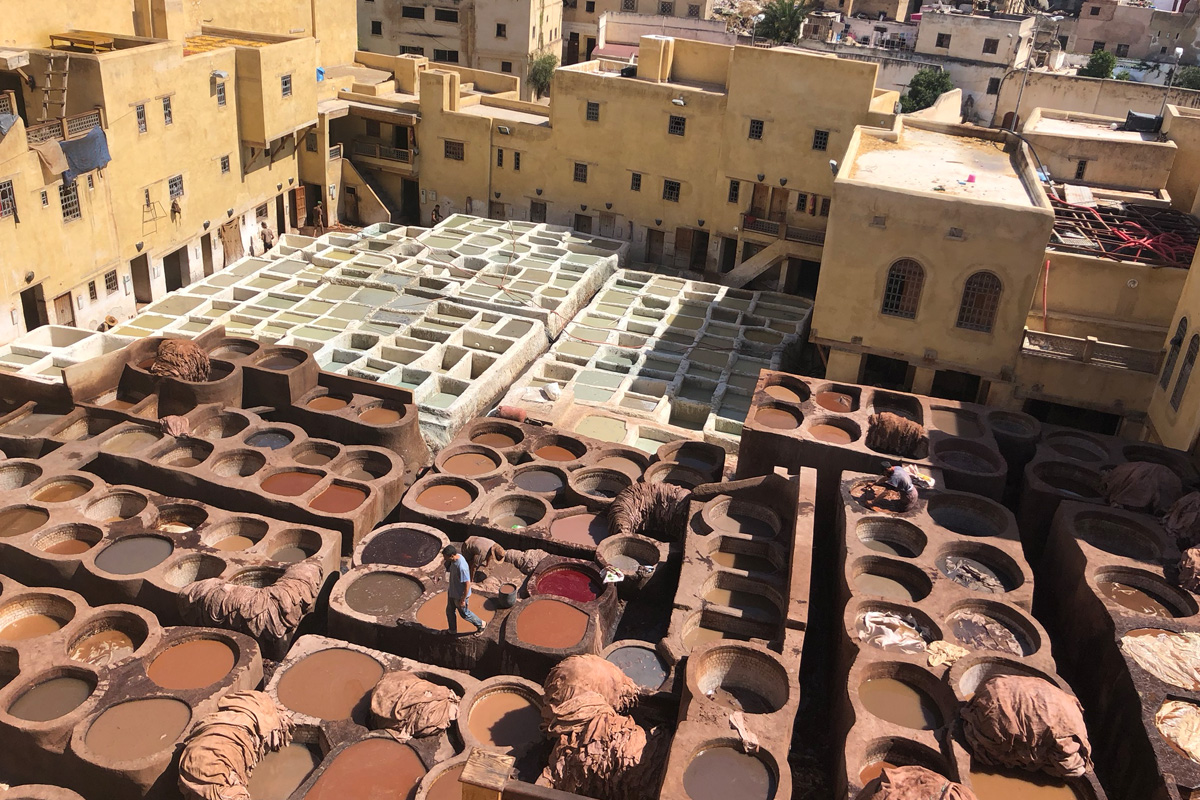 Hold your noses! This is one fascinating…and pungent stop on the tour where you see the process of tanning leather so they can be transformed in the different colors you see your handbags, wallets, jackets, etc. that are sold in the market. Thank goodness you get a sprig of mint leaves to alleviate the odor!

Camel Ride Through the Desert It’s a surreal experience that’s simply breathtaking. It’s where you probably can’t get enough photos to capture the magical beauty of the vast Sahara with its fine, clay colored sand stretching into the horizon. Riding a camel is as cool as you’d imagine it to be, too. Pro-tip: If you’re big into Instagram, it might help to think of your OOTD (outfit of the day) ahead of your trip to go against the picturesque backdrop of the sky and sand. You’re welcome. 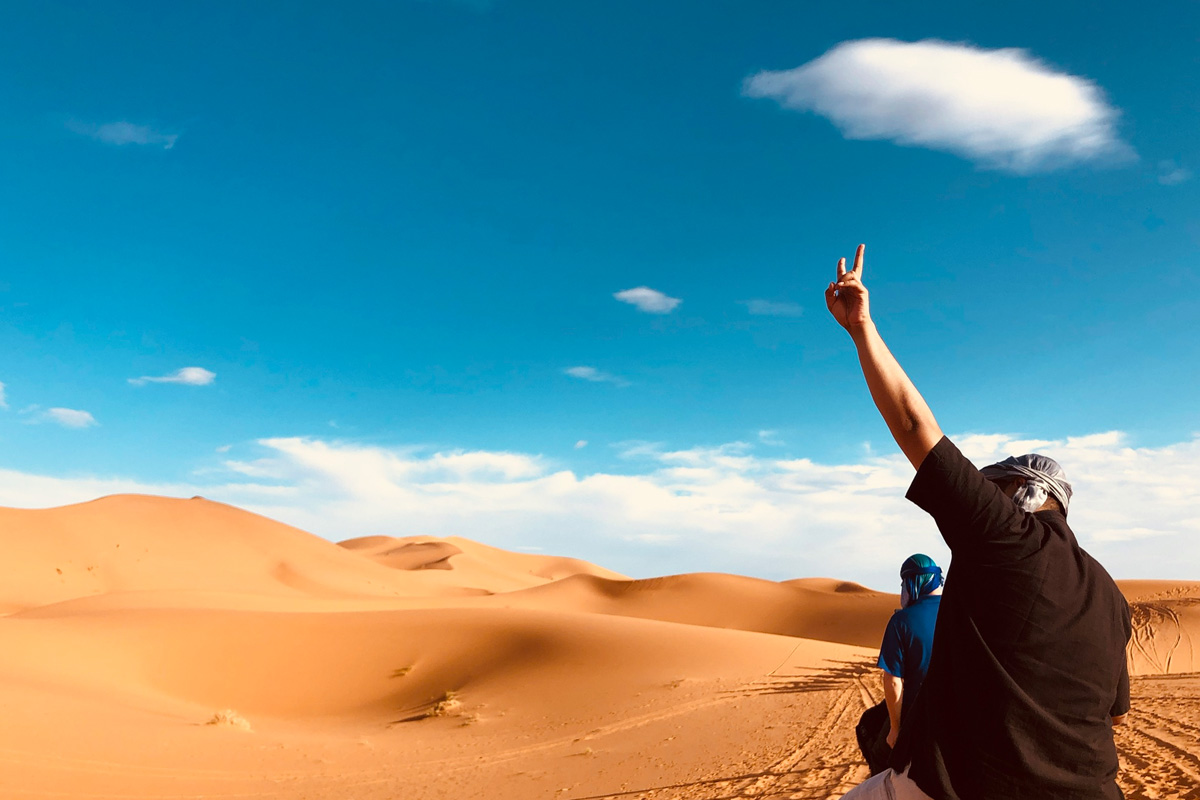 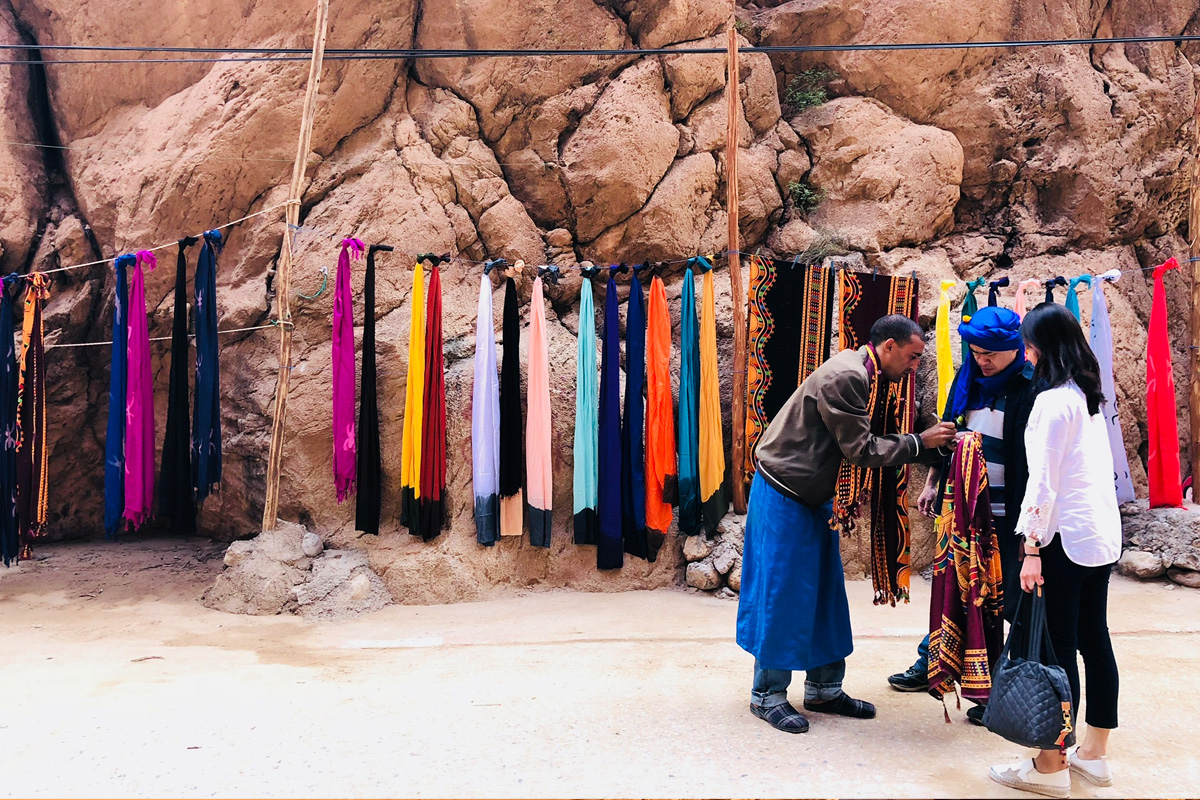 All you need to know is that Ait Ben Haddou (situated in the province of Ourzazate) was the city that portrayed the city of Yunkai from Game of Thrones. You can just Google that. But it is actually another UNESCO World Heritage site, a fortress that’s also stunning to photograph during sunrise or sunset. Ourzazate is popular for being the backdrop for several big Hollywood movies including Moses, Cleopatra and Gladiator. 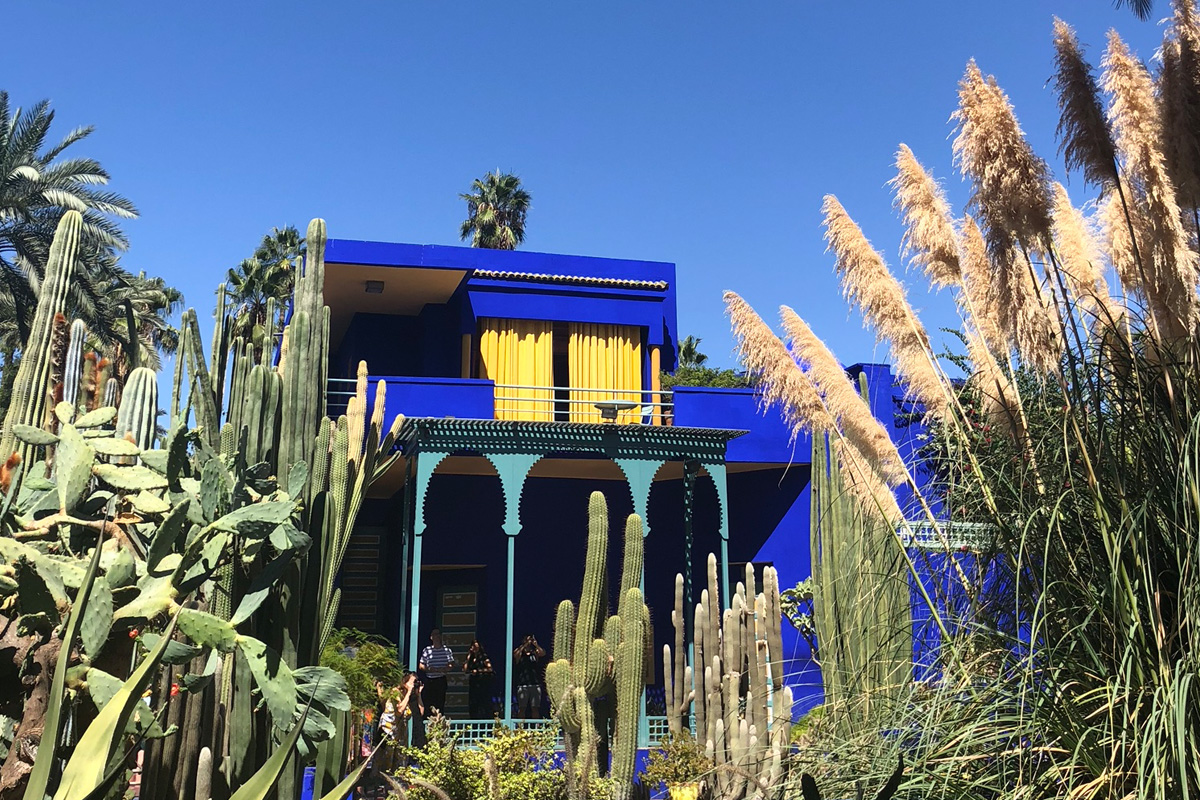 If you only had time for one major stop in Marrakech. I would suggest splurging a little on the ticket fee to go inside the enchanting Jardin Majorelle, formerly the home of legendary fashion designer Yves Saint Laurent and his partner Pierre Berge. It is definitely a beautiful oasis and a refuge from the heat with its lush botanical garden built in the 1920s by French artist Jacques Majorelle, a combination of Moorish influence and Art Deco. It should probably take you about an hour or two to meander through the 2.5 acre sprawl.

Cap your travel through Morocco or Marrakech with one of the best dining experiences at Le Caspien Hotel. Dine al fresco poolside and enjoy a very international gastronomy with a menu featuring French, Italian, Spanish and Moroccan dishes to choose from. Trust us, after all the permutations of tagine throughout Morocco, you will likely be on the search for a different fare.

Morocco… While You’re there, Enjoy a Riad

One experience that’s distinctly Moroccan is staying at a riad. As much as TV would have you envision the flamboyance and opulence associated with middle eastern nations such as the U.A.E, Moroccans are much more reserved when it comes to displaying their wealth.

A typical riad is found among the medina, or city center where markets are usually the focal point. From the outside, a riad is nothing more than a nondescript concrete slab with a door.  Enter to find a home that is literally inside out and creates an entirely private experience–some modest and others a lavish luxury mansion of five-stories, or more.

Many modern or rehabbed riads include some sort of “splash” pool on the roof or at the base of the center courtyard, as ours was. Located in the main medina of Marrakech, the kitchen, dining and living area are on the lowest level for families to gather. A winding stone staircase at the corner of the structure leads to bedrooms with stone bathrooms and an exclusive and very private rooftop to enjoy sunbathing with an outdoor shower for extremely hot summer months, or just hanging with friends.

If you do make the trip to Morocco, just do yourself a favor and spend a few days living like a local–Even a bit on the high end side. Check AirBnB.com and Booking.com for some surprising good rates–some even with daily private breakfast service included! 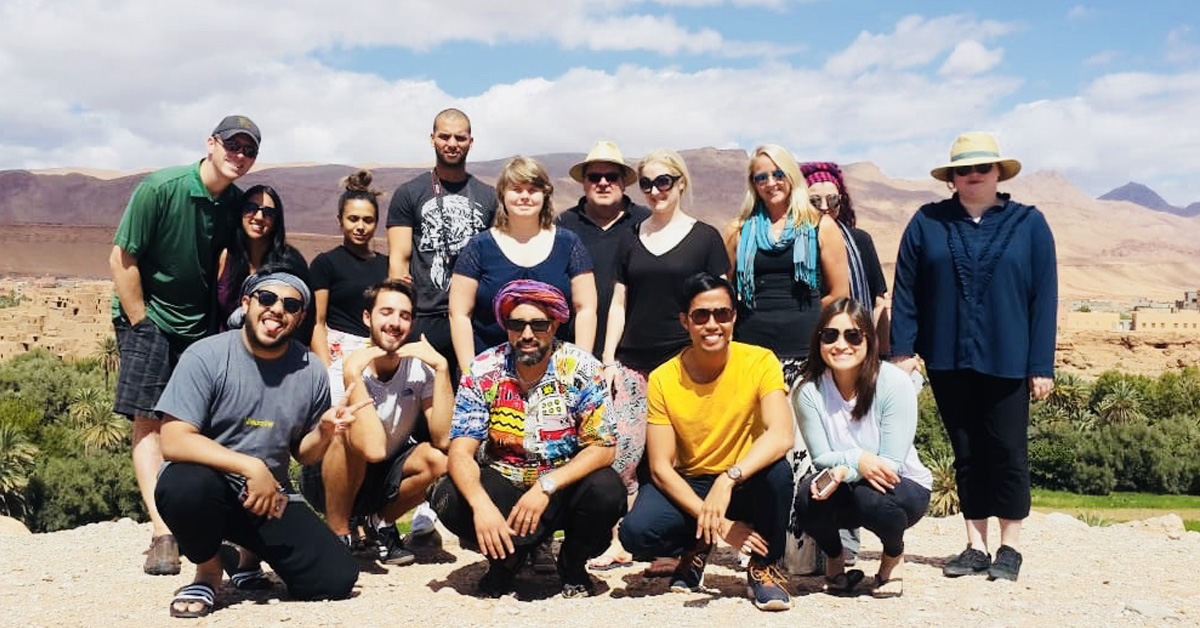 Pictured above is our international group of travelers with our superb G Adventures guide Abdul.

Brian Bailey contributed to this article.