The Florida Holocaust Museum has a signed a three-year agreement with USC Shoah Foundation – The Institute for Visual History and Education. This new partnership will allow The FHM to make its digital collections of art, historical documents and first-person testimonies accessible to students and scholars across the state of Florida.

USC Shoah Foundation was founded in 1994 by Steven Spielberg. He began the institute to videotape and preserve interviews with survivors and witnesses of the Holocaust. Today, the institute houses nearly 53,000 videos amounting to more than 112,000 hours of audio-visual content. Testimonies have been conducted in 63 countries and in 39 languages.

"Three years ago, The FHM embarked upon a technology initiative to digitize the Museum's collections and upgrade infrastructure to support 21st Century learning. We continue to be grateful to the State of Florida for their vision in supporting this initiative," said Elizabeth Gelman, executive director of The FHM. "We have now reached a new juncture and will soon be able to share our resources in a meaningful way with classrooms throughout the state of Florida, the U.S. and in 52 other countries."

The FHM collection of testimonies will be one of the first to be entrusted to USC Shoah Foundation under the initiative, Preserving The Legacy. This initiative uses the Institutes state-of-the-art infrastructure to digitize, index and integrate Holocaust testimonies taken by other organizations around the world in the Visual History Archive. This effort will ensure the preservation of the museum's collection while extending The FHM's reach worldwide. and make it a consistent and leading resource for educators across the globe.

The FHM and USC Shoah Foundation's partnership reaches zenith as the two will collaborate to develop curriculum specifically to meet the standards and needs of Florida classrooms. All of these efforts will aid in a full evaluation of the educational materials. The robust research program will give scholars, educators and museum officials a more in-depth understanding of the impact of testimonies and Holocaust education on a new generation.

Pending funding, this new program is set to launch in July. 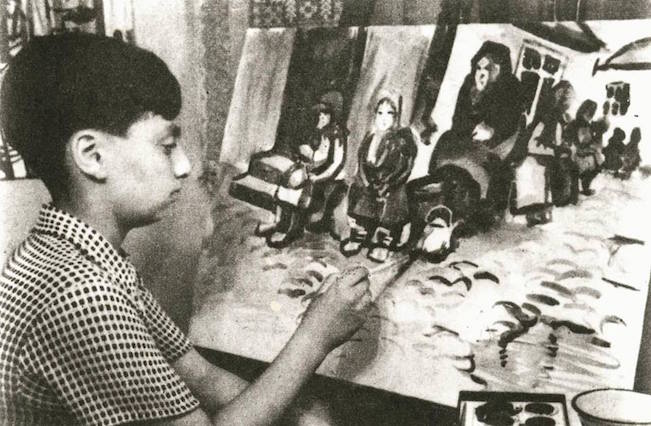 *Rare photo of Samuel Bak taken in the Landsberg Displaced Persons Camp in 1946 as he painted the Vilna ghetto.

While you wait for their extensive collection of rare documents to be digitized, visit The FHM and experience their brand new exhibit "A Restrospective." The collection, curated by the artist himself, features works by Samuel Bak. Born in Vilna, Poland, in 1933, artist Samuel Bak began painting as a boy. The first exhibition of his work was held in the Vilna Ghetto when he was 9 years old. Mr. Bak and his mother were the only members of his family to survive the Holocaust. After World War II, they fled to the Landsberg Displaced Persons Camp, and Mr. Bak enrolled in painting lessons at the Blocherer School in Munich. He and his mother immigrated to Israel in 1948, where he studied at the Bezalel Art School in Jerusalem. The exhibition will be on display at the Museum from February 20, 2016 to July 10, 2016. In conjunction with Pucker Gallery.