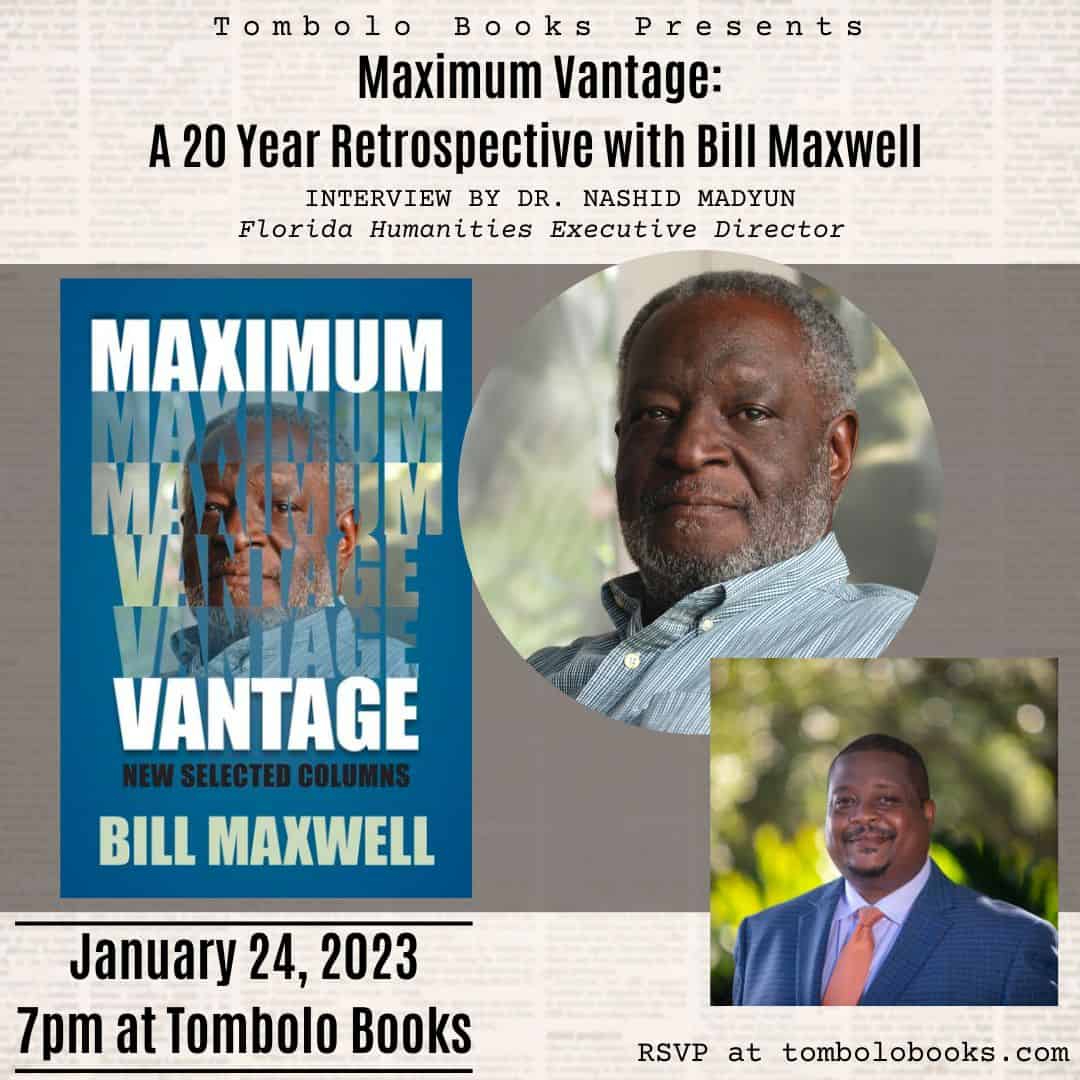 In this collection of columns spanning the years 2000-2019, veteran journalist Bill Maxwell tackles important issues faced by Florida and broader American society that remain as relevant as ever.

Tombolo Books welcomes award-winning journalist Bill Maxwell to the bookstore to share the latest collection of his columns.

Maxwell writes from the vantage point of a Florida native who grew up as a migrant farmworker at the end of the Jim Crow era; a Black man who participated in the civil rights movement to help make the state more equitable; a college professor who lectured about the harms of racial discrimination; and an environmentalist who has lived in the Everglades as artist-in-residence and his decades of speaking truth to power has earned him a place among the state’s most important contemporary voices!

Maxwell will be in conversation with Dr. Nashid Madyun, Florida Humanities Executive Director.

Let us know we will see you there! PLEASE RSVP!

Bill Maxwell wrote a twice-weekly syndicated column and editorials for the St. Petersburg Times from 1994 to 2009, and monthly through 2019. His columns appeared in 200 newspapers worldwide and received many writing awards, including the Florida Press Club’s plaque for general excellence in commentary (twice) and the Community Champion Award from the American Trial Lawyers Association. From 1988 to 1994 he wrote for the New York Times Regional Newspaper Group. During and before that period he taught journalism and English for eighteen years, at the University of Illinois (Chicago), Governor’s State University (Park Forest, Illinois), Northern Illinois University (DeKalb), Santa Fe Community College (Gainesville, Florida), Broward Community College (Pembroke Pines, Florida), Indian River Community College (Fort Pierce, Florida), Florida Keys Community College (Key West), and in the Florida prison program at Lake City Community College. At various times from 2013 to 2017, he taught writing at St Petersburg College and Miami-Dade College while writing weekly articles and columns for the National Park Service and Everglades National Park Centennial. He founded Role Models Today Foundation to support journalism students.

Dr. Madyun has served as the Director of the Stax Museum of American Soul Music, the Texas State History Museum, President and General Manager of Gibson Retail Group (a division of Gibson Music Instruments), the Art Museum and Archives of Hampton University, and most recently, as the Director of the Carrie Meek and James Eaton Sr. Southeastern Regional Black Archives Research Center and Museum at Florida Agricultural and Mechanical University.

He continues to teach courses in Humanities, African American Art, U.S. History and Graduate courses in Business. Dr. Madyun has served on a host of boards and public service commissions; including but not limited to, the Blues Foundation, the Austin Arts Council, Arkansas Black History Commission, Virginia State Heritage Preservation Board, and the Visit Florida Cultural, Heritage, Rural And Nature Committee, and the African American History Task force for the State of Florida.