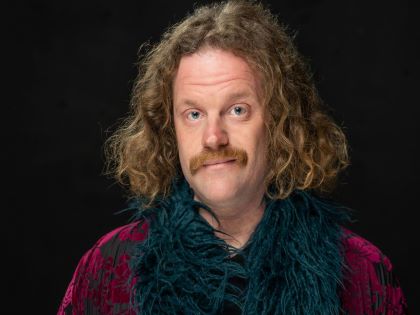 18 and up. Seating one hour before showtime. Rated R
Click for a clip of Alex Hooper

Alex Hooper is a stand-up comedian, actor and professional roaster. He delights crowds by blending dark humor with silly positivity. His joke writing is clever and fearless. Onstage he bursts with energy. Alex shines just like his sparkly wardrobe. He’s headlined clubs all over the world. And whether it’s an audience of 11 or 11,000 – Alex leaves comedy goers begging for more.

Alex is best known for his appearances on America’s Got Talent. He’s one of a select few contestants to have been asked to return after being eliminated in season 13. His first AGT performance has over 75 million total online views.
As part of his never ending quest to spread love and joy, Alex releases a weekly podcast — Achilles’ Heel. This podcast pushes guests outside of their comfort zone. Alex tackles tough topics like social anxiety and sex addiction with humor and grace.
In 2018 Alex released his debut comedy album Hugs. Drugs. Pugs. It hit #1 on Amazon and #3 on iTunes Best Selling Comedy Records.
To say Alex is a serious pug lover is an understatement. For 2018 he created The Pug Yoga Calendar to raise funds for pug rescue: Pug Nation of LA. Ellen Degeneres spotlighted the sold-out 2018 Pug Yoga Calendar on The Ellen Show.
Alex is the creator of CRAVE — an immersive comedy and dance music experience.
Funny Or Die named him one of the 15 Funniest Comics to Follow.
Alex’s TV credits include:
America’s Got Talent – Seasons 13 & 15
Comedy Central’s Roast Battle
Comedy Central’s Corporate
Fox’s New Girl
TVLand
Nickelodeon
and the truly prodigious, Bad Girls Club.
Advertisement