Last year, artists from around the world feverishly worked to tattoo the walls downtown during the SHINE St. Petersburg Mural Festival. This year will be no different as the 2017 artist lineup has been announced.

With a variety of local, national, and international artists, SHINE is guaranteed to have a fresh perspective on the art of mural painting. Here’s the list of announced artists.

Artist Allison Tinati, known as Hueman, grew up drawing and painting in Northern California, and

received her degree in Design and Media Arts from UCLA in 2008. Hueman’s style reveals colorful mash-ups of the abstract and figurative, the beautiful and grotesque. Tightly refined compositions begin with spontaneous paint drips and sprays, creating motion on two-dimensional surfaces. Her layered works can be seen on public walls and in galleries worldwide.

Cryptik creates from a palette of wonder where science, math, and art intersect. His artist practice is about asking questions, and his intricate works spread across mammoth walls or canvases in stylized depictions of spiritual universality. The Southern Californian hypnotically blends Eastern philosophical mantras with black letter bombing, merging the ancient and sacred in a modern quest for awareness.

Netherlands-born Joram Roukes is an internationally working fine artist recognized for collage-like assemblages and perspectives on contemporary culture. His playful compositions build narrative and irony through balanced tension and impressionistic images. Roukes is currently represented by Galleri Benoni in Denmark, Thinkspace Gallery in California, and StolenSpace Gallery in London.

Vladimir Manzhos, known as Waone, is an artist and muralist based in Kyiv, Ukraine. Influenced by hip-hop graffiti traditions, Waone creates surrealist murals populated with fantastic imagery, bringing bright colors and smooth gradients to walls from India to Miami. His most recent project is located in Toiles de Rue, Rabat, Morocco.

Lauren YS is a San Francisco-based artist whose work is influenced by dreams, mythology, and her Asian-American heritage. Her large-scale public murals bring a sense of wonder to communities, as she populates a vibrant wonderland with misfit heroines and fantastic narratives. Lauren’s art appears at festivals such as Art Basel Miami, Pow!Wow! Hawaii, and PangeaSeed SeaWalls, as well as in galleries in Vienna, London, and Sydney. 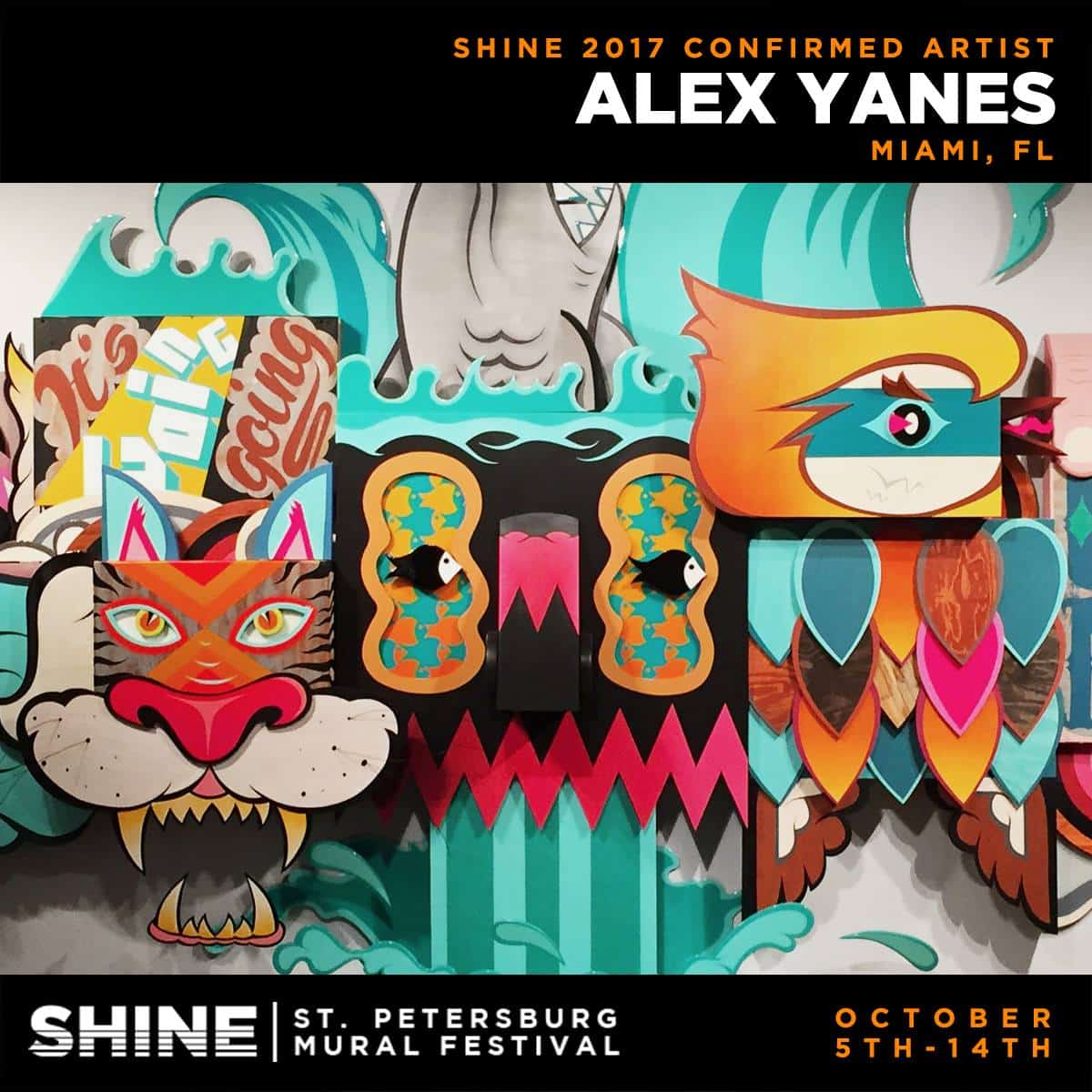 The art of Alex Yanes tells a story influenced by Cuban roots, growing up in Miami during the ‘80s and ‘90s immersed in skateboard, tattoo, hip-hop, and rock culture. Whimsical but relatable, his art features innovative use of color and imaginative subjects, coming alive through wood, acrylic, resin, and enamel into three-dimensional installations. Yanes is now working and raising his family in Miami, while catching the attention of art aficionados and corporate collectors alike.

Axel Void (Alejandro Hugo Dorda Mevs) was born in Miami in 1986 to a Haitian mother and a Spanish father. Raised in Spain from age three, he was strongly influenced by classical painting and drawing. Axel studied fine arts in Cádiz, Granada, and Sevilla, and has been immersed in graffiti writing since 1999. He was based in Berlin before moving to Miami in 2013, where he currently resides.

Sam Yong is an artist and illustrator based in Melbourne, Australia, working across a variety of

traditional mediums. A love of nature and solo adventure manifests through his art, where intricate illustrations reflect on complex relationships between living things. Yong has exhibited in Paris, the United States, New Zealand, Melbourne, and is placed in private commissions across the globe.

Influenced by early years as a graffiti artist in Copenhagen, Mikael B founded his own design agency before moving to Los Angeles to work as an urban contemporary artist. His signature identity combines the graphic footprint of wildstyle graffiti with bold colors and geometric shapes, building a dynamic universe reminiscent of musical visualization. His monograph includes energetic works on canvases and walls, gallery exhibitions, and commissions by clients such as Google, Nike, and American Express.

An artist and image-maker based in Miami, Jose Mertz pushes an experimental style inspired by ancient civilizations, science fiction, eastern philosophy, and the supernatural. Embracing multimedia platforms, his work ranges from traditional painting and murals, to product design on t-shirts and stickers.

New York-born artist Stephen Palladino creates work combining raw, expressive mark making with tight and clean lines. Building upon his childhood obsession with cartoons and graffiti, Palladino creates characters that are slick and gritty, dark and lowbrow, mashed up with hidden layers of popular imagery and dialogue. Commissioned by Lady Gaga, Absolut Vodka, Reebok, and others, Palladino is currently based in Los Angeles and presented his first solo gallery show there in 2015.

Yok & Sheryo are Brooklyn, New York-based collaborators influenced by skateboarding and kitsch culture who have exhibited and painted together around the world. Singaporean Sheryo seeks to analyze the human psyche and mercurial contemporary lifestyles, while Australian-born Yok is fueled by cartoons and street graphics. Together their mural and installation art stretches across mediums, speaking to those with an unabashed affinity for ‘80s and ‘90s popular culture.

Tampa-based artist Jujmo brings her affinity for color to life through drawings and paintings of happy, intertwined worlds. Fanciful, cartoonish, and strange creatures collide in her densely patterned compositions on walls, canvases, and even shoes and cars. 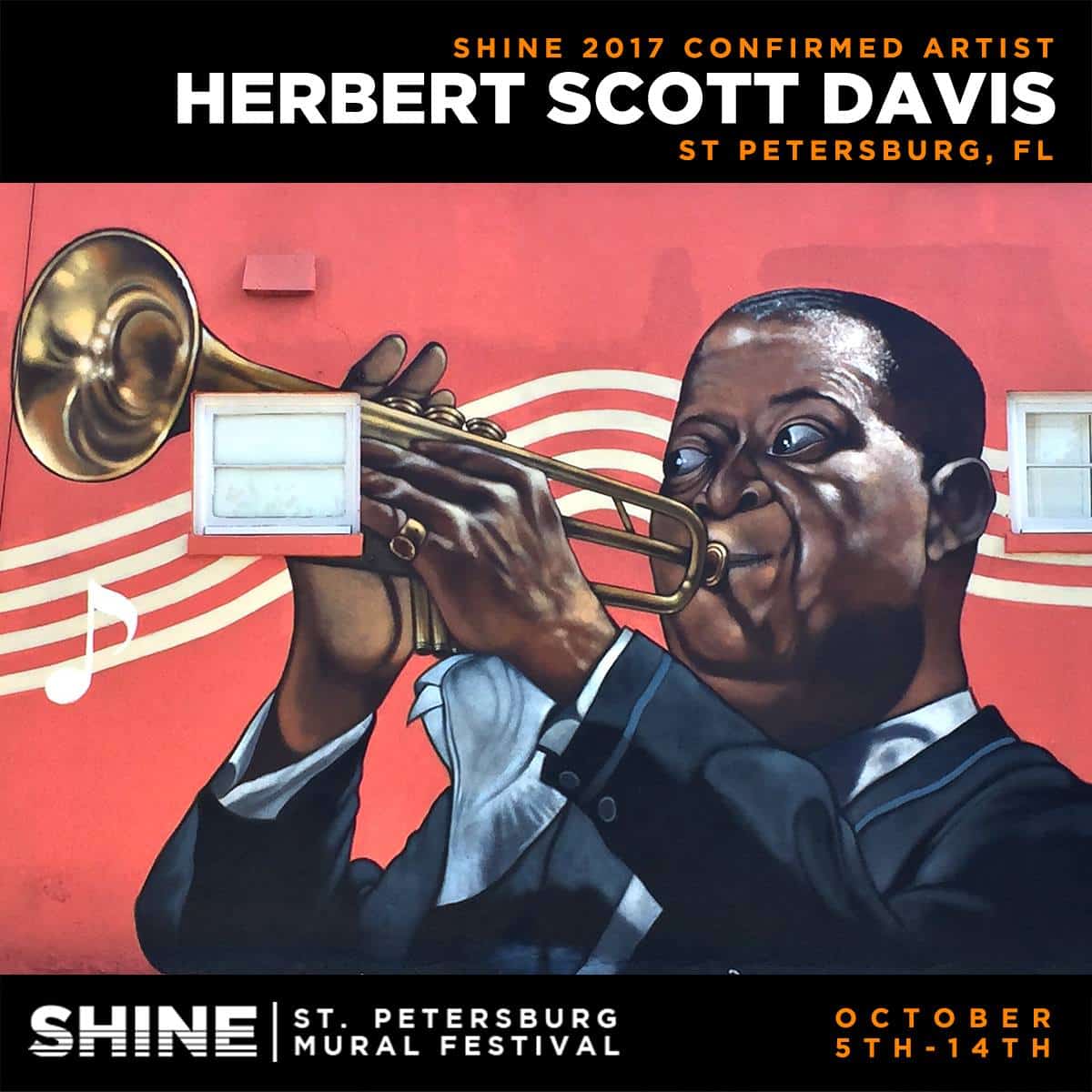 Growing up in historic Ybor City, Herbert Scott Davis developed an early passion for art and culture. A graduate of the Art Institute of Fort Lauderdale and former freelance illustrator, Davis now focuses on fine art, bringing his detailed or abstracted imagery to canvases and walls alike.

Jared Hernandez, also known as Thirst, is a prolific St. Pete muralist who has long been active in the local street art scene. His detailed artwork, found on walls throughout the area and across Florida, reveals a love of comic books and pop culture, showing vibrant depth through geometric shapes and patterns.

Zulu Painter is a multi-media artist working in traditional mediums, as well as in body paint, special effects, installation, and scenic art. His aerosol-based murals can be found throughout Florida, including large-scale works in St. Petersburg’s Historic Midtown that contribute to the creative revitalization of this bustling city.

The recipient of this year’s SHINE Open Call Wall is St. Pete artist John Suarez, a graduate of Ringling College of Art and Design and founder of Art in the Park in Bradenton. Suarez is a contemporary artist known for his signature portraiture work and graphic style. Using the moniker Suarezart, he creates detailed paintings, sculptures, digital illustrations, and drawings.